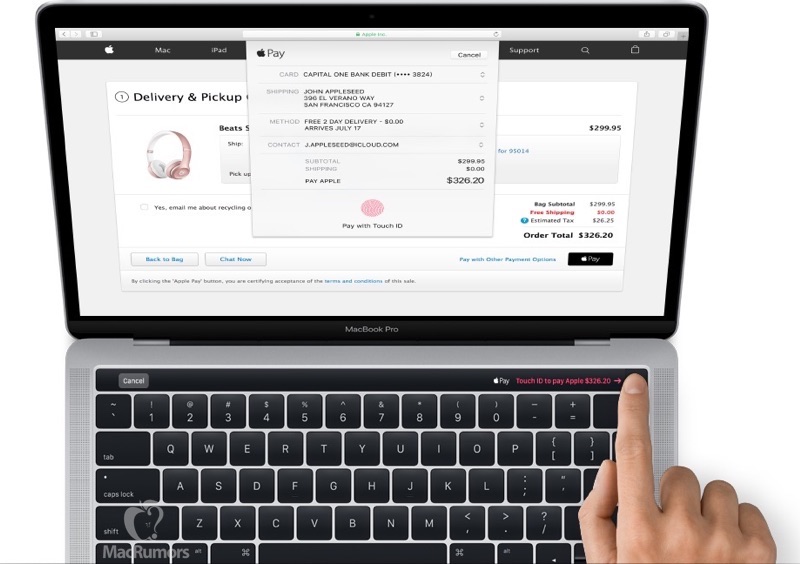 source: macrumors
﻿
Apple is expected to announce its next-generation MacBook Pro in the upcoming event, photos contained in the newly released macOS 10.12.1 update appear to show the design of the new notebook, including its dynamic touch-sensitive function row.

The OLED touch display shows a user where to place their finger to authorize an Apple Pay purchase. The Touch ID fingerprint sensor will be located to the right of the so-called "Magic Toolbar," appearing as a simple all-black button. To the far left of the bar, where the escape key would be on a current MacBook Pro, is a digital cancel button.

It is believed that the new OLED touch bar will dynamically change its appearance and present virtual buttons to users based on the app or task at hand.
kei, Seth and Morgs likes this post!
Felidae
Novice
Joined: 10 May 2016
Posts: 100

Reply: Images of New MacBook Pro with Magic Toolbar Leaked 26 Oct 2016 5:31 AM
oh my god when i saw this picture first i thought it was some meme like 'wow apple even has a button now to purchase its useless stuff more fast'
kei
Skilled
Joined: 3 Apr 2016
Posts: 902

Reply: Images of New MacBook Pro with Magic Toolbar Leaked 27 Oct 2016 2:30 AM
bye the new keyboard looks disgusting i'm not even a fan of paying using apple pay this is just a big nty for me
Bray
Newbie
Joined: 28 May 2016
Posts: 76

Reply: Images of New MacBook Pro with Magic Toolbar Leaked 1 Nov 2016 11:47 AM
I actually agree the keyboard is gross..... I don't think I'll upgrade to this model. I'd rather keep my brick. But the fingerprint touch is cool, I just don't see why you need it on a computer though?

Login or signup free to participate in discussions!

Learn more about us »

Guests can only view posts in limited forum categories.