With the arrival of this August's Summer Bazaar, Habbo has also introduced bazaar crafting! Using dyes which can be bought in the shop, users are able to recolour certain bazaar themed furni to better suit their style!

1. The 3 base dye colours (blue, yellow and pink) can be purchased in the shop as shown below for 1c each.

﻿2. The green and purple dyes must be crafted using the purchasable Dye Bucket as shown above for 8c.

To use the Dye Bucket, place it in a room and double click it to open the crafting menu.

To claim the green and purple dyes, replicate the crafting combinations shown below. 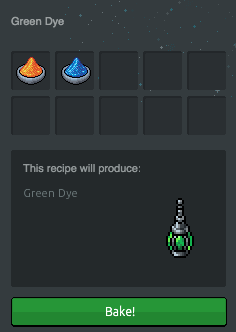 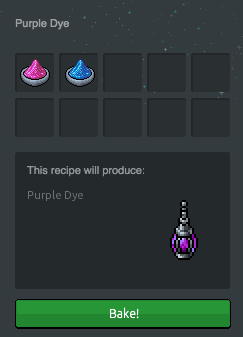 and a single yellow dye to be crafted.﻿﻿ To do this you will also need the Dye Bucket as mentioned before.

To claim the Mystic Dye, replicate the crafting combination shown below. 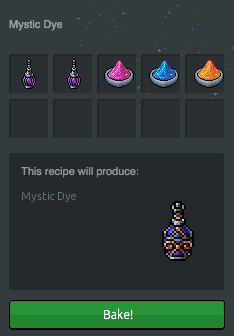 Here is a list of Furni than can be recoloured using bazaar crafting:

To recolour a chosen Furni, first use the Dye Bucket (which must be placed in a room).

Afterwards, choose which Furni you want in the crafting area, as well as the necessary dyes for the colour you desire.

Finally, click "Bake!" and the recolouring should be complete! (The recoloured Furni will appear in your inventory).

Below, is an example of a Bazaar Lamp being recoloured into a Purple Bazaar Lamp. 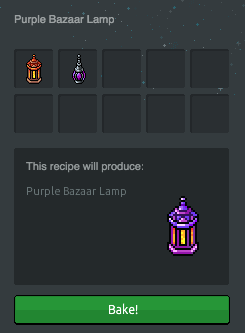 If you are unsure which dye combinations are necessary to ﻿make a Furni a certain colour,

If an ingredient is shrouded in grey, it means that you have not obtained it yet,

and will need to purchase/craft it before the Furni can be recoloured.

In the example shown below, the Blue Trimmed Bazaar Vase cannot be made as the user is missing a Blue Bazaar Vase. 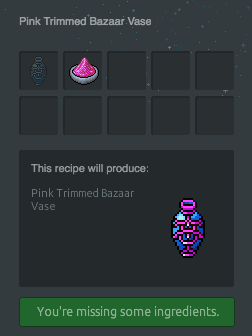 Note: Most ingredients can also be bought in the Marketplace﻿.

Now that you know how to recolour your new Summer Bazaar Furni, tell us what your thoughts are in the comments!